The Nordic countries – a blank space on Kampmann’s map. Until now.

Kampmann operates across Europe and is even present in China. The company uses its eight representative offices outside Germany and around 80 contractual partners to provide coverage across the continent for its customers. So it’s initially surprising that the Nordic countries have remained something of a blank space on Kampmann’s distribution network map for a long time. A blank space that’s now being filled.

It’s not that Kampmann simply ignored these countries in the north. Many projects have actually been successfully completed in the far north over recent years. But there wasn’t a structured sales organisation that had been carefully built up yet. That’s not because the region is not interesting as a market. Kampmann’s presence across the world is rather impressive in view of the fact that the company is still quite young (44 years of age). But Kampmann has never rushed into anything. Careful planning followed by step-by-step implementation is how the company builds up its sales networks in other countries. And now its attention has turned to the Nordic countries. But we cannot conceal the fact that it’s no coincidence that the region is last on the company’s list of European places it wants to serve – the market there is complex and domestic competition is fierce.

First of all, a distinction must be made between the ‘Nordic countries’ and ‘Scandinavia’. The term ‘Scandinavia’ is quite spongy and ambiguous. From a purely geographical point of view, it refers to the Scandinavian peninsula, which includes Norway, Sweden and the north of Finland. In a broader sense, Scandinavia is understood to cover Sweden, Norway, Finland and Denmark. Some people also include Iceland. But Finland is culturally different. For instance, Finnish as a language has completely different roots than the languages spoken in the other countries. And then there was also a political movement called ‘Scandinavism’ during the 19th century that wanted a Swedish-Norwegian-Danish union (but didn’t get it). Finland didn’t participate in those efforts. The Nordic countries, on the other hand, are clearly defined. They include Sweden, Norway, Denmark, Finland, Iceland, Greenland, the Faroe Islands and the largely autonomous Åland archipelago off the coast of Finland.

What all countries have in common are magnificent landscapes and a high level of social and economic development. Norway has, for instance, ranked first in the Human Development Index since 2001 (with a brief intermission from 2007 to 2008 during which Iceland led the field). The United Nations uses this index to determine how prosperous countries around the world are compared with each other. These counterpoints create a great contrast: on the one hand, impressive nature, expansive landscapes, loneliness, silence – and in the populated areas almost perfect infrastructures with the most advanced technologies and global business enterprises. Not like people in Germany, where the virtues of diligence, punctuality and sense of order that are attributed to them sometimes result in grimness and stiffness, the neighbours to the north achieve their success in a relaxed and always friendly manner. This applies to the world of commerce just as much as it does to the world of leisure, e.g. sports. But they do work hard there, too – it’s just that they don’t forget to have fun as well.

Opening the door to the market

It’s not easy even for a company like Kampmann to secure a footing in a region that’s economically strong. German engineering skills are certainly appreciated in the Nordic countries but their own domestic products are definitely able to keep up. And blood is often thicker than water. In Finland, for example, products from other countries are actually only used if there’s no appropriate domestic product available. And it would be wrong in any event to put the markets of the Nordic countries in the same basket. Not only economically – considerable variations exist in the law that must also be taken into account when entering a new market. That’s why Kampmann carried out an extensive market survey to this end. That survey also drew on the experience gained through cooperation with the respective foreign chambers of commerce and trade partners who have been working for Kampmann in the Nordic countries for a long time.

Energy efficiency plays a major role as is to be expected from advanced nations. But it’s also important because the winters in the north are longer and colder and the energy costs are accordingly higher. A decisive advantage for Kampmann due to the fact that many of the products from Lingen are characterised by maximum efficiency. But the market in the Nordic countries remains a learning process for Kampmann: applications and locations for heating, air-conditioning and ventilation systems cannot be simply transferred as is from Germany to other countries. A company also has to make a name for itself as a solution-oriented manufacturer. It’s therefore reasonable in the pursuit of its step-for-step strategy for Kampmann to attempt to initially gain a foothold in the two largest regional markets: Denmark and Sweden and particularly the urban centre that is Stockholm. Language versions of Kampmann’s website, including its shop, are helping the company in its efforts to establish a local representation there in the near future. Kampmann is going north – and will be staying. 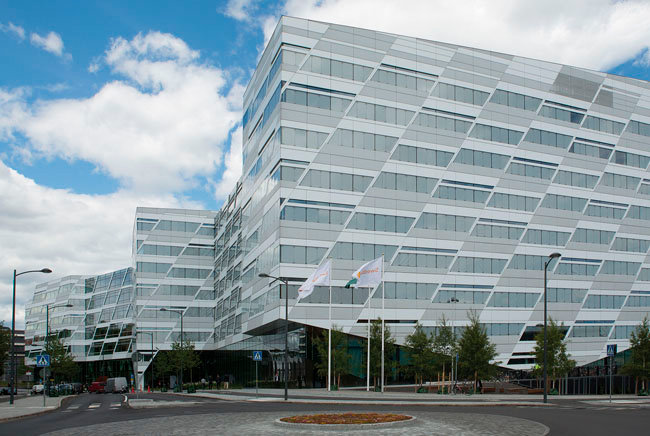 Kampmann is already able to report first successes in its efforts to expand northwards. The new Swedbank’s headquarters in Sundbyberg near Stockholm was equipped with 731 Katherm NK units, for instance. This trench heating system has been fitted in front of the windows that extend down to floor level and thus create the transparency that the Denmark-based 3XN firm of architects wanted to achieve for the 45,000 square metres of gross floor space that the new highly attractive structure boasts. Katherm NK units provide heating using the principle of natural convection and are characterised by the facts that they don’t take long to heat up and that they’re easy to control.