Bright prospects – the new Belvedere neighbourhood is being developed in the capital city of Austria.

Would you have known? Austria is the heaviest country in Europe. How is that measured? Put in simple terms, the Earth’s crust is “weighed”. And according to that, Austria weighs 9,400,000 billion tonnes. Many other countries do weigh more overall (for example, Germany with 28,000,000 billion tonnes), but thanks to the Alps, a square kilometre of land mass in Austria weighs an average of 122 billion tonnes – and that is the highest European value. And would you have known that the capital city of Austria does not have a main railway station? Well – until recently in any case. 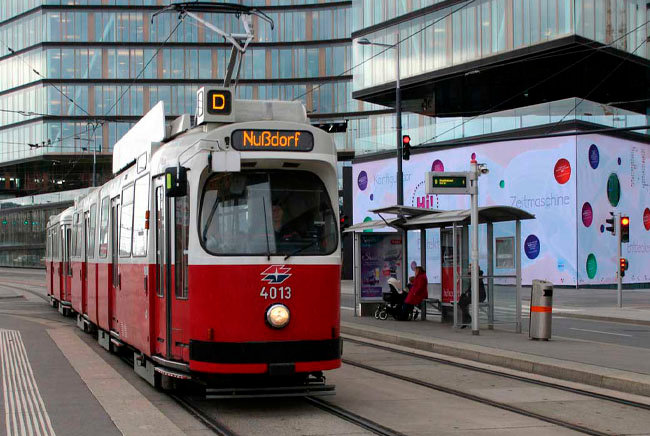 To be more precise, the voluminous Südbahnhof was demolished. The new main railway station was developed from scratch in close proximity. Now that’s enough of railway stations! Let us turn to the Quartier Belvedere which in still construction in progress on the barren land that emerged out of all this. To deviate once again: the Quartier Belvedere has its name from the world famous Belvedere close by, which made absolute sense from a city planning point of view. The new district forms the transition from the new main railway station to the castle and then into the historic centre of Vienna – an extraordinary axis. And thus sought-after building ground that was to be used in a sensible and clever way.

THE FIRST ONE ON SITE – ICONIC IN CONSTRUCTION 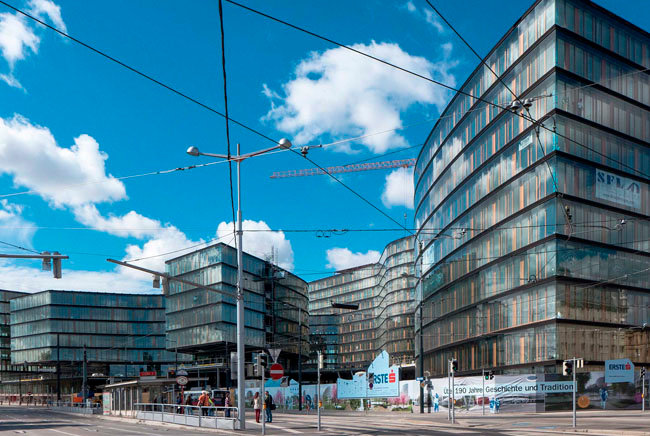 The Viennese city planners focused on a mixture of business branches, accommodation, parks as well as cultural facilities and shops. The first completed large project – and the builder-owner, Nomen est Omen, wasn’t having that taken from him – is the new headquarters of the Erste Group, better known as the “Erste Bank Österreich” in the Alps state. The Erste Group is one of the largest banks in Central and Eastern Europe with 3,200 branches in eight countries. The headquarters in Vienna was previously distributed among 20 sites in the entire city. These forces are now bundled in the new headquarters christened the “Erste Campus”. 4,500 employees moved into the complex, which not only appears light and transparent from the outside, but also lives the openness on the inside: open-plan offices without a firm allocation of desks are certainly a challenge for the employees previously working decentralised. Yet Ursula Kuntner from the Erste Bank reassures the ORF: “we started to prepare our staff for the new office situation two years ago.” Michael Hamann, the project manager, adds: “When you go through the building, there is not one single disadvantaged desk. There are all well-lit. There is no desk that overlooks a dark courtyard”. For this to be like that, the façade is fully glassed. And so that no radiator blocks the view outside, Katherm trench heating by Kampmann has been installed in front of the windows.

Just like in the neighbouring business centre Icon Vienna. Or to put that in better words: as it will look in the Icon Vienna. For here, the construction work is still in full swing. It was started in autumn 2015 and the completion is scheduled for mid-2018. In this time, three office towers of different heights will be built and they will be connected to each other by way of a semi-basement that is connected directly to the new main railway station. This results in a dynamic stress field comprising public space and business world. And even if the figure that is of interest to Kampmann cannot keep up with the figure of the weight of Austria, it is remarkable. The number of Katherm trench heating units to be supplied and installed: 2,980.